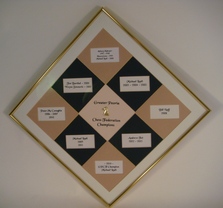 The Peoria City Championship was reinstituted in 1997 after a long number of years of not being held.  The  format from 1997 to 2006 was  a 6 man round robin invitational.  The first qualifier was the previous years champion.  The second qualifier was the previous year's Greater Peoria Open winner or highest placing local player. The third qualifier was the Membership Tournament winner. The winner of the annual December tournament qualified. The winner of the Class Championships also qualified. The sixth player was an at Large Invitee.

Beginning with the 2007 tournament the City championship was expanded.